Too small to ask questions when ‘young’, too big to ask when ‘old’: Pandhara Chivda Director Himanshu Singh

Too small to ask questions when ‘young’, too big to ask when ‘old’: Pandhara Chivda Director Himanshu Singh

“Children’s innocence should be protected and kept intact”

“As children, when we have so many questions in our mind, we are told that we are very small to get answers. And later when we grow up, we are asked why we don’t know the answers, despite being an adult. This is how society defines who at what age is young and old, to suit its expectations of how we should behave.” This irony of our society has been brought into sharp relief, by Himanshu Singh, Director of the IFFI 51 Indian Panorama Non Feature Film Pandhara Chivda. Singh was addressing a press conference at the 51st International Film Festival of India in Panaji today, January 23, 2021, after the screening of the film at the festival yesterday.

Explaining the theme of the film, Singh said: “The film is about a seven-year-old child Vithu who wants to ask questions about death. In our society today, we can find that sex and death are two things about which we rarely speak in a candid manner.” Hailing from a close-knit rural family, Vithu develops a liking for a particular taste, which comes to him as a surprise. The taste soon begins to occupy Vithu’s world and becomes his sole point of curiosity. The film explores Vithu’s search for the same mouth-watering taste. His journey takes unexpected turns, leaving him with enduring lessons for the journey of life.

Singh highlighted that children’s innocence should be protected. “Through Pandhara Chivda, we want to highlight that we need to protect the innocence of our children. We hush them up when they are young, due to which they end up being not bold enough to seek and get answers when they grow up.” 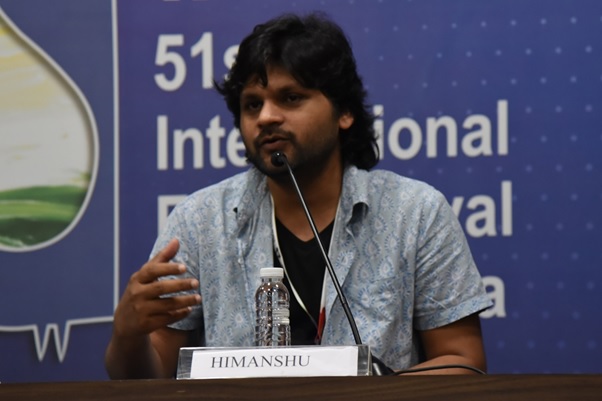 Responding to a question on how the practice of respectful questioning can be encouraged and made more acceptable, Singh said: “There is a need to differentiate between respect and questioning. When a child poses questions, it asks them with all innocence and inquisitiveness.  Whether the child questions with respect or not doesn’t matter; the important thing is that the child’s questions need to be answered.”

Himanshu, who is a graduate in TV Direction from the reputed Film and Television Institute of India, Pune, explained that the film took birth from his desire to do something together with his batchmates, after passing out from FTII. “We got this story from our mentor and HOD of Department of TV Direction, Prof. Milind Damle, who is also the producer of the film. Then, we realized it mirrored a lot of our own experiences. It is said that cinema is an extension of our own personal experiences, and we as a team, had this in mind when we made the film. It also enabled us to stay in Pune for a few more months.” The film has been shot entirely in Pune and surrounding areas, with a crew mostly from the FTII.

The film has won the prestigious Bronze Elephant Award at the Kid Cinema International Film Festival 2020.