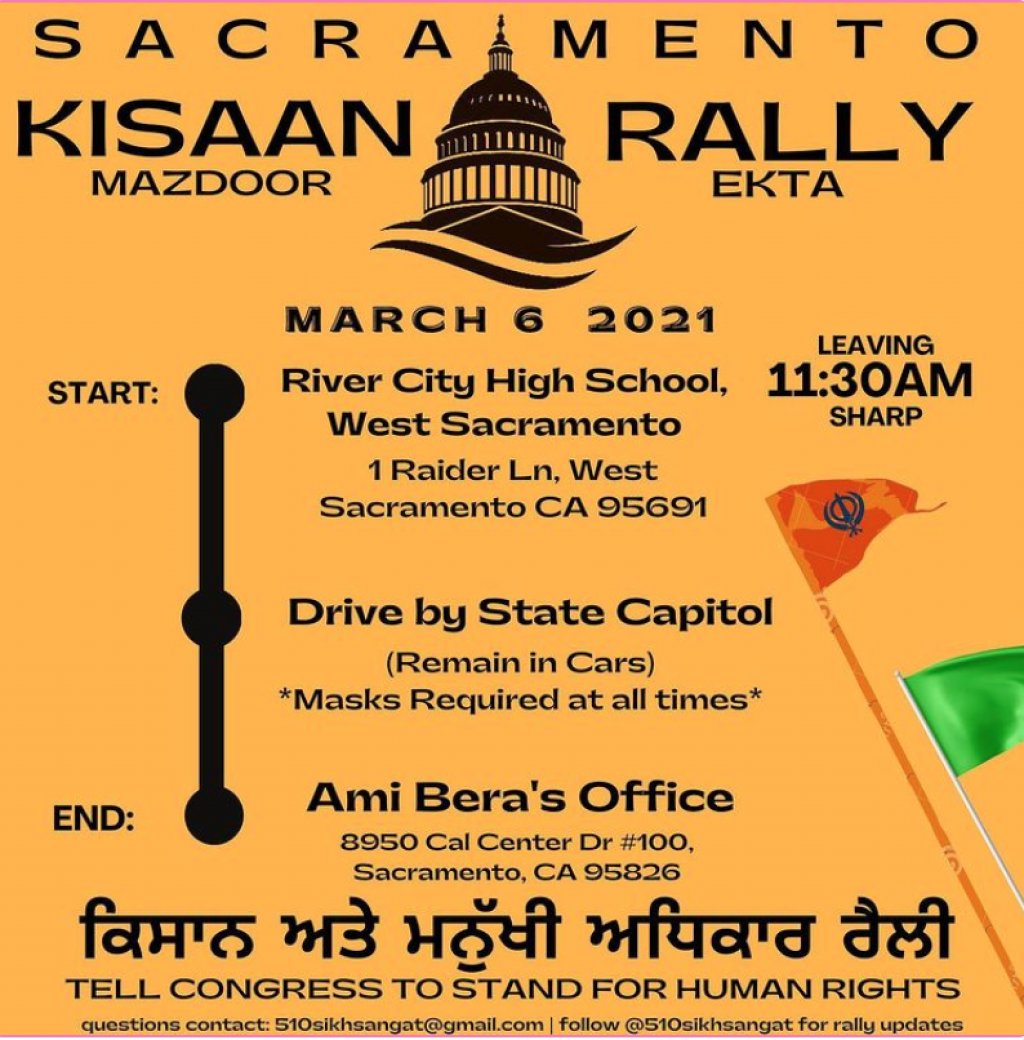 Hundreds of youth activists in Sacramento, California join a protest and rally at Ami Bera’s office to condemn India’s human rights violations towards farmers and protesters in India.

The ultimate goal of this rally is to spread awareness about the Farmers Protest in India, while shedding light on the many recent authoritarian-type human rights violations of the Indian government, especially to marginalized groups like Sikhs, Muslims, Dalits, and more. Peaceful protestors in India have been met with barricades, police brutality, unlawful arrests, including cut access to electricity, internet, and toilets at protest sites. In addition, ground-zero journalists and activists like Mandeep Punia and Nodeep Kaur were unlawfully jailed, beaten, and reportedly sexually assaulted for showing dissent.

The Indian government’s new rendition of farm bills allows further exploitation of already struggling farmers. The exploitation of this already vulnerable group has affected farmers in the way of suicides, with one farmer committing suicide every 30 minutes, making a total of 17,500 farmer lives lost in India every year.

California is home to over half a million Indian-Americans, and many of whom still have family in India and are direct descendants of farmers. Youth rally organizers felt that there was not enough support from their local elected officials. In particular, the greater Sacramento Indian-American community is trying to understand the reason for Rep. Bera’s silence on India’s current affairs. Not only is Rep. Bera of Indian descent, but his 7th Congressional District is also 15% Asian, of which many are Indian-Americans.

Rep. Bera holds various positions of power in the South Asian community, including being a member of the American Sikh Congressional Caucus and holding a Chairmember position at the Foreign Affairs Committee/Asia Sub Committee. Many of his constituents hope that Rep, Bera would be sympathetic towards concerns that the Indian community has been faced with regards to India’s Farmers, and be focused on resolving issues, and finding resolutions.

Rally organizers and youth activists want to hold their elected officials accountable. In addition, 7th Congressional District constituents have tried to contact Rep. Bera and his offices, but he and his team have been silent on the matter, with no official public statement.

For more information about the Sacramento Car Rally And Protest For India’s Farmers, please contact Deepi Kaur at [email protected] or call (415) 799-7149.