“Male content is sought after and female content is not, that is the discrimination we face in cinema”: Actor Ritabhari Chakraborty

“Our film reminds us that no creation of God can be impure just because they menstruate”. These are the words of Ms. Ritabhari Chakraborty, the lead actor of the Bengali film Brahma Janen Gopon Kommoti, which was screened in the Indian Panorama – Feature Film Category, of the 51st edition of Indian International Film Festival of India, being held in Panaji, Goa. Ms. Chakraborty was addressing a press conference, along with Director Shri Aritra Mukherjee, Producer Shri Shiboprasad Mukherjee of Windows Story, Screenplay Writer Ms. Samragnee Bandopadhyay, writer Ms. Zinia Sen and lead actor Shri Soham Majumdar. She added: “It’s such an honour for our film to have been selected for IFFI, as the subject of our film is very interesting and close to all our hearts. Though it talks of something really serious, it is a joy-ride. Women face discrimination everywhere. Our film is about a woman priest; the film writer decided to break the taboo against menstruation, and I’ve been honoured to play the lead role.”

The film tells the story of Shabari who is a lecturer, performing artiste and most importantly a priest. The film subtly and in a humourous way tells, how, after marriage, Shabari struggles to cope with the many changes in her life and her efforts to continue performing the rituals as a priest.  The film primarily portrays how menstruation is still a taboo in Indian society.

When asked about whether women actors are facing discrimination in the industry and how she navigated it if she has faced it, Ms.  Ritabhari said that, “There is a lot of content revolving around women, all of which should be said in feminine voice; however, it’s not happening due to various reasons like satellite rights. Women are always not in need of being rescued, we too have our stories to tell. Male content is sought after and female content is not, that is the discrimination we face.”

While sharing her wish to have more producers who take up different ideas, Ms. Ritabhari added that: “It’s content, not the hero or heroine, which matters”.

Talking about the style in which the film tells the story, Ms. Ritabhari quipped that “There are many forms in which a film can be made and it’s not always mandatory to follow a serious tone to tell a serious subject. If one wants to connect with more people, humor is the best way,” she added.

Speaking about the story, script writer Ms. Zinia Sen said: “I realised that there is this story that needs to be told, and we conceived this story together. The journey started when a woman was not allowed to take part in a religious ritual because she was menstruating then.” She also thanked IFFI and Indian Panaroma for selecting the film. “It is my debut film and there are a lot of other freshers too in this film.” While talking about Bengali films, Ms. Zinia says that Bengalis tell stories from the heart and that’s the most important thing.

Actor Shri Soham Majumdar who plays the protagonist’s husband Vikramaditya, said that initially, he held the assumption that it’s just another story, but once he delved deeper into the subject, he felt that “as a man, I am not doing my job correctly”. “It’s truly an honour that the film has been selected in Indian Panorama. I feel if we men do not take the steps together, we cannot create any form of society where all are equally positioned, irrespective of gender. I feel a movement has emerged after the film was screened in halls.”

Detailing his character, Shri Soham said that Vikramaditya supports his wife in every step she takes, “They march on together”. 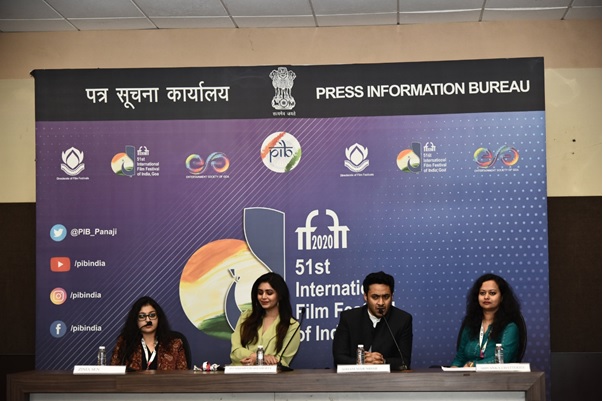 Shabari is a lecturer, performing artiste and a priest. She learnt the right way of performing Hindu rituals from her father. When Vikramaditya, son of a Panchayat Pradhan, proposes her, she tells him that she performs puja, among other things. Her words are misinterpreted for the puja that women perform at home. After marriage, Shabari struggles to cope with the many changes in her life.