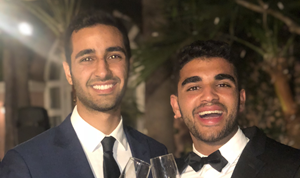 Los Angeles, CA, April 07, 2021 (GLOBE NEWSWIRE) — Via Tomorrow’s group – With a pandemic among us, singles have taken to virtual or online dating as a way to cope with the difficult circumstances the spread of COVID-19 has caused. Nationwide restrictions have not only changed the way dating works, but they’ve also changed pretty much every “real-life” experience we once knew pre-pandemic.

In February 2020, Daniel Newman and Leor Massachi, two business students at the University of Southern California, took notice of how drastically things were about to change once the spread of the virus reached a global scale. Just two years prior, the duo had developed a dating app named Dandy which allowed users to create a connection much like they would in a real-life scenario. Essentially, each user would only be allowed to log on during one of the app’s live sessions. Within the 3 minutes of the session, if two users happened to match, they’d message each other in real-time and automatically exchange phone numbers, where the users could continue their conversation and further establish their relationship off the app.

While the application took off strongly and reached remarkable levels of success, the founders realized that the potential consequences reflecting a pandemic would undoubtedly alter the dynamic of the application. Newman and Massachi knew they had to step ahead of the curve in order to figure out what the next step was for Dandy once COVID-19 got involved. They called an emergency meeting with the Dandy team, and in the end, they came up with Zoom University.

Zoom University is a dating app with a similar ‘in-person’ feel to the original Dandy app, but with a small twist. The founders describe it as a “live virtual party that hosts you and a friend” through two-on-two video chats, allowing you to make connections and meet new people while getting rid of the stress or awkwardness that may come from doing it alone. It took just over a day for the founders to get the web MVP up for Zoom University after their emergency meeting, and before they knew it, users were scrambling to join.

In efforts to market the product, the founders worked hand in hand with hundreds of TikTok creators to generate authentic content showcasing the app and its functions. One Tiktok video in particular reached over 2.5 million views in over 48 hours, causing an influx of users to register for Zoom University practically overnight. Considering the app was still in its initial phases of production, the team was forced to create a waitlist for app registration that reached hundreds of thousands of users. Over the last year, the product has received tremendous recognition for its design innovation and brilliant marketing, catching the attention of big investors involved with Uber, Snapchat, Airbnb, and Facebook. The app has also broken into the Top 10 of the Social Networking category within Apple’s App Store.

And who better to understand what millennials and Gen Z’s want from a networking app than millennials themselves? Massachi and Newman are each 23 and gathered all their ideas from watching their friends and university classmates interact, both pre and post-COVID. They understood that their generation strives to make new connections, which was extremely important to maintain despite the restricting complications of a global pandemic. But given that in-person interactions were more limited than ever, the app’s founders were constantly aiming to make Zoom University the most seamlessly comfortable method for upcoming generations to continue creating those new relationships, without the unnecessary risks.

Today, the startup team is constantly evolving in efforts to surpass their overall metric goals of user retention and engagement in upcoming projects. They are also implementing new changes utilizing the user feedback from prior products. According to the creators, the new projects in the works are in collaboration with some major industry investors, but no other specific details are allowed to be disclosed at this time. The founders of Dandy have fully committed to their product-based company and will continue to reinvent the way people connect and establish new relationships online. They have assured us that the future looks bright, so we’re eager to see how the early entrepreneurs change the tech world next.